Our group sprouted from an innocent conversation between three of us (Moshe Singer, Levitz Gross and Moishy Glaser) at the high school yeshiva where we studied. Hours of serious thought and a lot of help from the Jerusalem Bird Observatory brought the unlikely idea into reality. At last year’s Champions of The Flyway 2019 Competition, we, The Blackcaps, participated as the first Jewish ultra-Orthodox group ever in this race. Our main goal was (and remains) to protect nature, in two ways:

Thank God, we met with success in both of these goals! In last year’s competition, we won the Israeli Guardians of the Flyway award for having raised more money than all the other Israeli groups ($4000). And we are on the way to achieving the second goal: several other ultra-Orthodox Jewish birdwatchers have contacted us, wanting to join our group in the coming year. To that end, we are happy to publicly welcome two new members, David Baievsky and Rafael Ganz.

This year, we’re continuing with our goals. We want to raise as much money as possible to promote nesting amongst the Steppe Eagles in Kazakhstan and Uzbekistan. Funds will specifically be devoted to preventing electrical shock, increasing available nesting bins and raising public awareness about preventing local fires. The Steppe Eagle is a great and impressive eagle, and about half of the population migrates to and from Africa, through Israel. Seeing Steppe Eagles in the Israeli sky is an amazing experience that the danger of extinction is sadly threatening. Unless we do something substantial, the Steppe Eagle will be a thing of the past.

So please help us help them, by donating and supporting our group in this competition.

In keeping with our nature protection efforts, we will not use a vehicle during the race to avoid polluting the air. We will take a ‘green’ route and ride bicycles during the 24 hour bird identifying competition. Last year we cycled over 50 kilometers and plan to go even further this year! 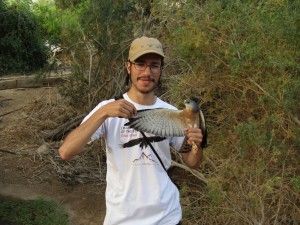 My name is Moshe (20) and I live in Jerusalem. Since I was a little kid I was a nature lover, with a special interest in plant life. 7 years ago I went with a friend to a small grove to see Cyclamen blossoms, while enjoying the winter blooms, I saw my friend gazing into a bush and pointing with great interest. I followed his finger and saw a small, brown-gray bird with a bright brown-orange chest, my first Robin. From that moment something changed in me. I became a birdwatcher!

Today I study at a Yeshiva in Jerusalem, and go for daily bird-watching walks. In my spare time I work at the Society for the Protection of Nature as groups’ guide for ultra-Orthodox Jewish groups in the Deer Valley. And in the KKL-JNF as a guide in bird watching classes for children from the ultra-Orthodox Jewish public.

My name is David (20) and I live in Beit Horon. I started bird watching 9 years ago when my older brother took me to the Jerusalem Bird Research Station to connect me to the bird world. He showed me how they live, and explained to me about urban nature and conservation values. I have not yet watched the birds professionally but I felt I was ‘attracted’ to it. I realized I can get into it more professionally and that would require some things from me, including updated bird guide, field trips, learning from birding professionals and of course a lot of patience. When I was 13 years old, my parents bought me a camera and a guide book and I started reading, going out for birding and taking pictures. Last year, I heard about The Blackcaps group that participated in The Champions of the Flyway competition. I applied to join them as it’s an extraordinary opportunity for me to join other religious participants in this incredible experience.

My name is Moishy (17) and I live in Jerusalem. I started birdwatching about 2 years ago when I met Moshe Singer and Levitz Gross at the high school yeshiva where I study. I’ve always enjoyed being out in nature, so it was ‘natural’ that I joined them and for bird observations. Over time, I became an independent birdwatcher myself, sharing with my family the love of birds, too. Since I became a birdwatcher, every family trip includes going out to nature and looking for the local birds. Every time I go to the Jerusalem Bird Observatory, my brothers and sisters, and sometimes my parents, ask to join. Even my grandparents who live in the United States have attended a bird watching class! 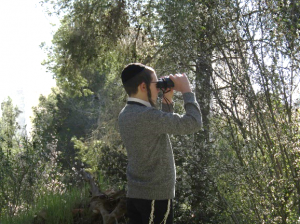 My name is Levitz (16) and I live in Jerusalem, and for many years I have loved nature, especially insects and mammals. Three years ago, a group from the yeshiva I study in, went on a holiday in a small agricultural village. At 3 am, I saw Moshe Singer leave the apartment with a camera and a binoculars, so I asked him “What are you doing?” So he told me “join me and you will see” …. after about 5 minutes, Moshe showed me a Long-eared owl and it was only the first of the list, we walked around continuously until 8 am and finished with a list of over 60 species! Since then I’ve started birdwatching more regularly until I became a ‘professional’ birdwatcher by myself.

My name is Rafael (15), I was born in America and have always loved nature (birds, reptiles and mammals). At the age of 10, I and my family immigrated to Israel and as I grew up, I became much more interested in birds (maybe that is because there are so many birds in Israel!). I started taking pictures with my dad’s camera, and over time I started traveling to many places around the country to take photos of more and more species [a selection can be seen here: https://rafaelswildlifephotos.wordpress.com/] . For a long time I wanted to join the Champions of the Flyway and I was very glad to hear about the ultra-Orthodox Jewish group because I can finally join.

The Buntings The Little Bastards
Scroll to top